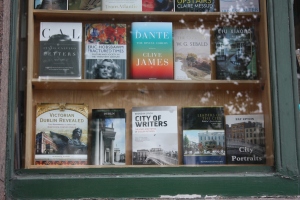 A number of years ago I wrote a book of fifty essays about various different aspects of life in Dublin. I sent it to a relatively small number of publishers and was somewhat surprised by the feedback…

While a lot of positive insightful comments came back, nobody wanted to run with the book. A writer I knew suggested self-publishing as an alternative.

In those days I believed, as I still do, that the publishing industry works quite well (if you can get into it). You submit a manuscript, it is accepted and then goes on its own mysterious way out into the world. I like this idea because, unlike self-publishing, it doesn’t END_OF_DOCUMENT_TOKEN_TO_BE_REPLACED

It’s debateable, to what extent, bookshops have really woken up to the challenge of online retailing.

They have certainly seen their turnover drop, for a number of different reasons. Some have tried to adapt, offering, for example, more ‘book-signings by the author’, but the response in general seems to have been somewhat anaemic.

While online can continue doing what it does best, there are many things the traditional bookshop space can give the reader that the internet will never be able to provide.

It’s important that these things are recognised and celebrated by those of us who are book junkies!

At the end of the day, it’s not all about price.

You can meet the scribe before she is shelved as ‘signed by the author’ in her own absence, first step on the way to singing the bargain shadowy basement blues@ 4.99 a pop.

You can encounter the books that have been lying in wait, just for you, it seems. These are not the same books others have read, in close proximity to the book you are now holding in your hand.

The other people are readers, just like you. They can have their personal recommendations shaken out of them with just a smile. The vagaries of memory can be set straight (Is that the author of?) there and then, something a computer screen will struggle with.

You can give the tired, overdrawn yet still cheerful bookshop owner a few bills to keep the show on the road, to make the space work for all the things in it that don’t work, way they are supposed to.

You can have a cup of tea or coffee, served up with a smile you can smile back at.

The token of your enthusiasm can be taken away, on the spot, without having to wait for the postman to find you out at work, a wet week later. The book is the book you are getting, not some other book, dog-eared and page-creased because something mechanically-armed bumped into it, in the warehouse.

At readings, words can be heard as a living presence, a force field of energy that isn’t quite the same when it’s served up on CD to the half-engaged ear. The mind can wander and be brought back to itself by a sentence. The listener can erupt onto a road in Rhode Island or hear what is to be placed on a stone table in Vermont, like someone who needs to be woken up, once again, to the story of herself.

You can leave, book in the crook of your arm, into the night, out into the city, with the author’s words still humming as a fresh sound in your skull, and a little something else that cannot be reduced to words: the finetime of hearing another world being brought to you, gratis, on the house we are all inhabitants of.

Last year, I published ‘City Portraits: 100 Portraits of Everyday Life in Dublin’. This arose out of an earlier book I had written of longer pieces about Dublin, fifty in number, that I plan to publish later this year. Subjects discussed range from the Dublin Pub, our National Gallery on to portraits of the Dublin character…

Old men in Oxmantown putting the word into their pushbikes. Jowlstrained faces from a time when who knows what was the case.

Ghostly children that didn’t have a ghost of a chance, a-play in places you didn’t think were of interest to gawkers with cameras.

Like in the strange paintings of our ancestors, the photos of voiceless faces caught in the past: you wonder how they sounded.

The shuddering nettlegasp of the bluebeaked crowd on Hill 16 on All-Ireland Sunday as the ball hits off the post more than ten thousand minds failed to move in time.

In gray air that is not just the gray of the black and white photograph, a woman in her bathing suit is poised in mid-air, having jumped off the bank into the Liffey, the only river in the entire world it seems that supports second thoughts.

A busker in the winswepterlies, with a hat in her hand the air seems to have been suckerpunched out of, looking at the ploddingalongski she seems to have lost faith in.

Black pints poured out in the name of the inspiration they contain, the punters smiling into the shot, happy to escort evening into night at their wooden moorings.

Old women that have retained their light. Hardship around which laughter still manages to dance.

Women’s hands raising their hopeless scopeless lament, women whose whole lives are in their hands.

Hairdos from the ballroom of romance, besuited Woodbiners holding in their arms the first step.

You can taste the freedom of children playing out in the street, as they scramble in a blind rush to bags their oxbloods and bumblebees.

An old man stares at the Liffey flowing, as if it’s let him down somehow, a river that, if you live here long enough, seems to get into your veins, until they’re flowing in a kind of paralysis that doesn’t need any more of the world than itself.

A woman, poodle in hand, walks past the pile of topers and no-hopers on the ground, and you can taste the distaste rising off her as she bypasses the dopes in dire straits, now down’n’out in what is presumably come-uppance.

Drinks arriving to debutantes like prayers on wheels beside an old man mannered in the silence of his stout.

Mecklenburgh mamselles you’re quite frankly surprised anyone would venture up a stairs with, waiting for the business they’re lucky to have, to rear its ugly head.

Cheery bleary eyes of the morningtide, your dickiebow halfway around your neck as you strive to forget the lady at your side who has been dropped from the team.

Mountains of silenced yap. Salt of the earth bullshit at the bar, faded behind photographic paper. Orthodontist’s dreams from somewhere beyond people starting to look like each other in the name of some new-found sophistication.

The fascination of a city full of clocks you feel you can only guess the time from.

Men so obviously up for the day the way they are put together, huddled with pints and pre-match predictions which reminded me that perhaps the most exotic place I have ever been to is Dorset Street on All-Ireland Sunday (when Dublin is not playing).

Our newest contributor is Pat Upton. A native of Inner City Dublin, Pat studied philosophy and translation before publishing his first book, City Portraits: 100 Portraits of Everyday Life in Dublin, in 2013 (available on Kindle and in Books Upstairs/The Winding Stair). In addition Pat has written a book about cafe life in the Walter Mitty Cafe in Dawson Street, Dublin as well as his latest ongoing project ‘Stolen Bicycle Sorties’, a series of fifty walks around Dublin in the company of fifty different poets, past and present.
He has just finished reading ‘Sky Above, Great Wind’, a study of the Japanese Zen poet Ryokan, and is half-way through Raymond Queneau’s novel Zazie dans le métro.
You can check out his blog or  his new Facebook page, Dublin City Portraits.